Thumbie Z War is born as a survival shooter combining zombie theme with X-Mas environment. It´s time to save Christmas using your bazooka.

After its beginning in the arcade puzzle world, Thumbie games jumps into shooter style games with Thumbie Z War, a frenetic survival games where we will play a feminine version of Santa Clause that will need to survive the attack of Zombie hordes which are willing to bring chaos to our Christmas village. 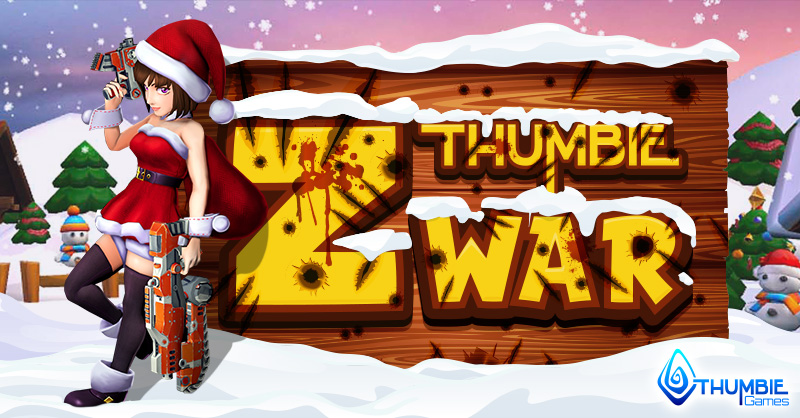 “It has been a real challenge for us as we only had very limited time to create a game of Christmas thematic which also had loads of action. We are very satisfied with the result. Game dynamic is simple, but the combination of multiple weapons and enemies in conjunction with a progressive difficulty increase, makes it very addictive killing zombies in a row. We are hopeful that this game will be welcomed and in the future we do not reject the possibility of making improved version for next season. Can you imagine a Thumbie Z War of Saint Valentine´s or a Halloween edition with multiplayer option?” has declared Miguel Ángel Taramón, Thumbie Games developer.

Great range of characters and weapons, and one only target: survive. Thumbie Z War comes to the market as bet to combine Zombie Apocalypse with X-Mas. The more Zombies we destroy the more will come up, more powerful – but our weapons will also improve and we will be able to get help for other partners. Endless addiction. For every Zombie down you will earn points, so will you to make spectacular combos.

This game does not have an ending, but competition is guaranteed as you can fight to reach the highest score among your friends, and even Thumbie universe.
Social networks play an important role – besides the score ranking you could be able to share your scores and get special bonuses.

Our Thumbie team has already had the chance to play non-stop with this game that assures endless hours of fun and the possibility to keep improving our anti-zombie abilities.

Thumbie Z War defies your reflexes, reactions and abilities as a player. Can you accept the challenge?